The Seven Youths of Ephesus: Maximilian, Iamblicus, Martinian, John, Dionysius, Exacustodianus (Constantine) and Antoninus, lived around 250 AD. Saint Maximilian was the son of the Ephesus city administrator, and the other six youths were sons of illustrious citizens of Ephesus. The story says that during the persecutions by the Roman emperor Decius, around 250 AD, seven young men were accused of following Christianity. They were given some time to renounce their faith, but chose instead to give their worldly goods to the poor and retire to a mountain cave to pray. During the prayer, they became overcome by great sleepiness. When they were found sleeping in the cave, at the behest of the emperor the entrance to the cave was sealed. An alternative version of this story claims that Decius ordered the incarceration of young men in a cave as punishment for their beliefs. 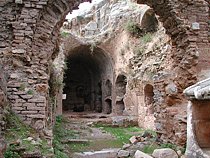 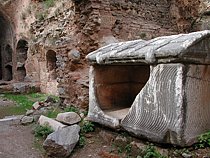 When the men were awoken centuries later by a landowner seeking to use the cave, they felt they had slept but a day and sent one volunteer to Ephesus to buy food. Upon arriving tp Ephesus, this person was astounded to find buildings with crosses attached. The biggest sensation was caused by his attempt to pay for the food with old coins from the time of Decius. City residents called the local bishop, who heard the story of seven young men.

When these young men died, following an impressive funeral, they were buried in the cave on which a church was built later. The excavations carried on here during 1927-28 brought to light a church and several hundred graves which were dated to the 5th and 6th centuries. Inscriptions dedicated to the Seven Sleepers were found on the walls of the church and in the graves. 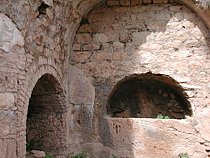 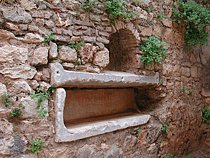 For hundreds of years, people wanted to be buried as close as possible to the Seven Sleepers who were considered holy. According to a Christian belief, St.Mary Magdalene is buried here, also.

The place is also known as the Grotto of the Seven Sleepers and it is now a ruined. In the side walls of the church, there are niches with arched vaults, and in the depths of the cave there is an apse. The inscriptions dedicated to the Seven Sleepers were found on the walls.