Aphrodisias - lies one hundred and seventy kilometers from Kusadasi, in foothills of Mount Baba Dagi not far from the village of Geyre by the river Maeander. In antiquity Aphrodisias was dedicated who was worshipped as the city's patron as it testified by the remains of a temple dedicated to her in the first century B.C. . It was a refined city of culture, popular with artists, writers and philosophers such as Alexander of Aphrodisias, an authoritative commentator on Aristotle or Chariton, who wrote erotic novels. The city was much loved by the Emperor Augustus who took an interest in its welfare and in his honour the citizens erected the Sebasteion, a street sanctuary complex with decorated columns. 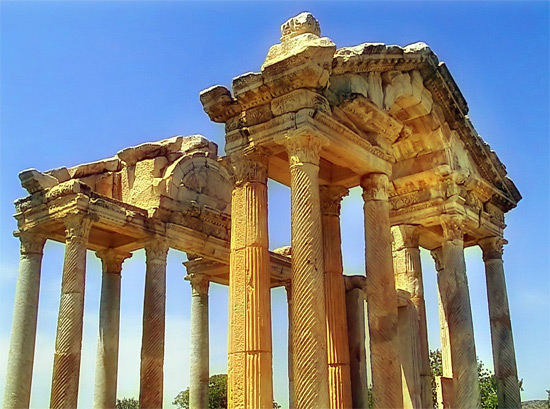 Before entering the archaeological zone, visit the Museum which has a collection of sculptural treasures, Graeco-Roman statues and ceramics dating from Bronze Age. The head of Apollo is breathtakingly ravishing, perfext and slightly feminine and the remains of the lower part of a statue of Aphrodite, are suggestive and modern, with the goddess's legs crossed- which unusual. There is also a fine frieze taken from the Monument of Zoilos depicting the slave who was a native of Aphrodisias being freed by Augustus. The Theatre is on the hillside, on the Acropolis. It was built by the Greeks in the first century B.C. and reconstructed and enlarged by Marcus Aurelius. Its capacity was for over ten thousand spectators and it later became an arena for gladiators and wild animals. 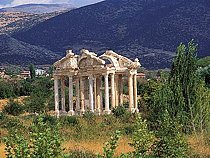 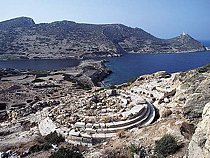 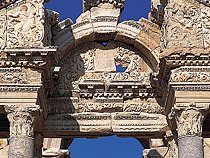 Next to the theatre are ruins of the Baths of Hadrian, an impressive building erected in the second century A.D. . The marble flooring is an perfect state of conservation. The complex was made up of five different areas with a gymnasium with columns and two large pools. At the bath's entrance through the main gate there is a sinister door-knocker depicting the head of Medusa. The Odeum or city meeting-place, had both stage and steps made of with marble. Not many of these survive, as is the case with few fluted columns remaining in the Temple of Aphrodite behind the Odeum. The temple was built in the first century B.C. with a double columned structure and a cella and an atrium.