Davutlar – region is marvelous for nature lovers. Dilek peninsula, which is located in the south of Davutlar, is really worth to be seen with its forests, various picnic areas and trekking paths. The forest cover is stronger in the high places. Here the lives of wild animals can be watched with interest. Historical places (Findikli castle, Kursunlu monastery, Malia city ruins etc.) that are hidden in the scenic beauties bring to light another feature of this region.

“The place under the most beautiful sky that we ever know on earth and the place where the finest climate is ever enjoyed…”. This description given for the Aegean coasts by the famous historian Herodotus is so overlapping with Davutlar that it is a corner of paradise with its nature, sun, water and air; “those who live here are very lucky people indeed” quoted by the Mayor of Davutlar. 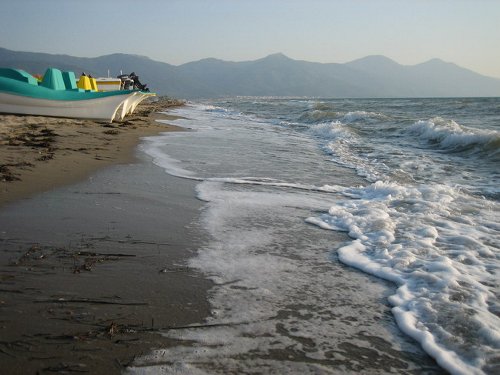 Located in the western Anatolia, Davutlar has been a place where various civilizations kept their existence from the earliest times due to its climate and natural riches. Research carried out reveals that the oldest peoples of this region and of the southwestern Aegean coasts were the Carians and the Lelegians. The region where Davutlar is located is one which is very important for the Ionians in every aspect. Such ancient towns as Ephesus, Miletus, Priene and Pigale, which were close to this place made this region active in political and commercial terms. It maintained such importance in the subsequent periods as well.

Davutlar district is located within the borders of Kusadasi region of Aydin province. It ranges over a wide field of 412 square kilometers in the north part of Dilek peninsula. It is surrounded by Aegean Sea from the west, Guzelcamli from the north, Kusadasi from the south and Soke from the east.

Mediterranean climate of Aegean type is dominant in the region. It is hot and arid in the summer and warm and rainy in the winter. Compared with the Mediterranean region, summers are warmer, the humidity ratio is lower and the winters colder in this region. The annual rainfall average is 645-650mm. The average temperature is 16.6C degrees. The coldest month is January and the hottest is July.

Some places to visit if interested in old buildings are;

MELIA (Archaic Period Carian Town) situated on a rocky outcrop at an altitude of 700-800 meters at the district of Belen Kuyu on the Southern slopes of Davutlar.

FINDIKLIKALE (Medieval Byzantine Castle) situated in the north of Samsun Mountains, is built on rocky land that is of an altitude of 600-700 meters.

KURSUNLU MONASTERY (Christian Ruins) situated on the north side of Dilek Peninsula, is built on rocky and heavily forested land at an altitude of 690 meters here you can get a good view of all the Karaova Davutlar grassy plain and Kusadasi bay.

PANIONION ( Meeting place of antiquity Ionian city states) situated between Davutlar and Guzelcamli and is on the lower slopes of Otomatik hill that is on the left side of the road leading to Guzelcamli.

KADIKALESI-KADI CASTLE (Castle of pirates located on the coast of sea in Karaova) situated in the region of Karaova (Anaia) which is between Kusadasi and Davutlar.

NATIONAL PARK This has an area of 28.000 Hectares is 8km from Davutlar and starts at Guzelcamli and lays on Dilek Peninsula. It has a width of 6km and is 20km in length.

SEVGI BEACH (Love Beach) this is directly off the beach and covers 100 square meters. You can picnic here and also enjoy the beach.

SIVRI TEPE (Sharp Hill) situated in the south of Davutlar on the northern lower slopes of Dilek. It is 600m high and is a typical cinder cone. Plateaus are situated on the lower slopes where you can view the Landscape of Davutlar and Kusadasi bays. You can also cook up there.

NALLICA (Wide table land) this is a wide tableland located on the top of Samsun Mountains (800m) and Dilek peninsula. You can view Kusadasi bay and B.Menderes delta and experience unforgettable pleasure during the trekking from Davutlar through waterfalls, foliage and staging posts.