Today Didyma is a small village close to the sea and praised by tourists and Turks on holiday for its golden sandy beaches. The sea however is not the only attraction for tourists, more so the ruins of the famous Temple of Apollo, a superb example of architecture dating from the Graeco-Roman period, and a sign of grandeur of this area, outstanding for culture and art. Even before the arrival of the Ionians, Difyma was a holy place and its oracle was much feared and much attened. The Persian King Xerxes destroyed the temple in 480 B.C. and looted many of the statues and also removed its vast treasury which owed its magnitude to the generosity of Croesus, King of Lydia. Alexander the Great decided to rebuild the temple after his victory over the Persians which had never been completely finished and was still uncompleted under the Romans, probably on account of its enormous dimension ( one hundred and twenty meters long and twenty-four meters wide) . Christianity put an end to pagan rites and festivals and prevented the temple from being completed. Indeed, in one atrium of the temple a basilica was built. 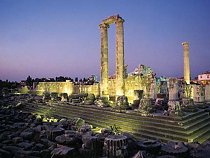 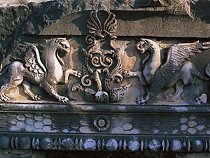 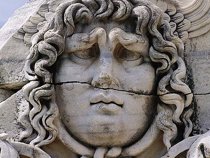 Traces remain of the temple's base and three Ionian columns standing twenty-five meters high are still upright, out of the original one hundred and twenty. There are also stones from the sacrificial altar and an antique fountain. The interior court, the pronaos and the steps leading to sacrarium can be all be identified. All around there are fragments of statuary such as the head of the Medusa with snakes for hair and fangs for teeth as she was transformed by Athena. Facing the temple there are a few steps from a second-century B.C. stadium where games were held on Apollo's feast days. A long Sacred Way with colonnaded porticoes, lead from Miletus to the sanctuary.

The foundation of the temple was rectangular in form, similar to most temples at the time. Unlike other sanctuaries, however, the building was made of marble, with a decorated facade overlooking a spacious courtyard. There were 127 columns in total, aligned orthogonally over the whole platform area, except for the central cella or house of the goddess. Marble steps surrounding the building platform led to the high terrace which was approximately 80 m (260 ft) by 130 m (430 ft) in plan. The columns were 20 m (60 ft) high with Ionic capitals and carved circular sides.

The temple served as both a marketplace and a religious institution. For years, the sanctuary was visited by merchants, tourists, artisans, and kings who paid homage to the goddess by sharing their profits with her. Recent archeological excavations at the site revealed gifts from pilgrims including statuettes of Artemis made of gold and ivory... earrings, bracelets, and necklaces... artifacts from as far as Persia and India.