Hierapolis - the "Sacred City / Holy City" - was an ancient city located at Pamukkale in south central Turkey. Its ruins are adjacent to modern Pamukkale in Turkey and currently comprise an archaeological museum designated as a UNESCO World Heritage Site.

There are still Baths at Hierapolis, on the hill above Pamukkale which have now become a museum. The ancient rooms serving as the frigidarium and the caldarium were clad in marble and had vaulted ceilings. In the Museum there is a collection of bronzes, glass and coins found during excavations and an unusual assortment of sculpture. 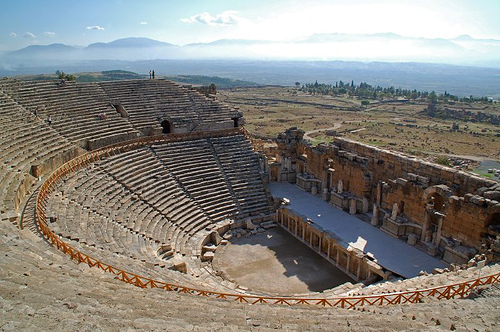 Near the remnants of a sixth-century Christian basilica with three naves are the foundations of a temple to Apollo, dating from the third century A.D. The recently restored second-century Roman Theatre is beautiful and majestic with fifty rows of travertine steps. The theatre is still in use when dances are performed during the city's much appreciated Festival. 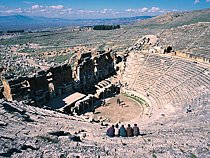 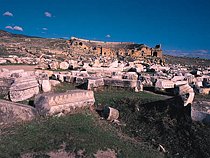 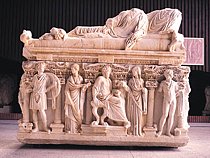 Outside the walls is the Martyrion of the Apostle Philip, a fifth-century sanctuary with an octagonal chamber where it is believed that the saint was martyred in 87 A.D. The unusual Arch of Domitian with a triple arch flanked by two round towers should not be over-looked. It was erected by Julius Frontius, Proconsul, Proconsul of Asia, in honour of the Emperor during the first century A.D. Neither should the city's Necropolis be omitted. There are about one thousand tombs, some small and simple, some majestically sumptuous and impressive, dating from many different periods.

From time immemorial the sick and the moribund, rich and poor, have gathered here seeking the healing powers of waters. Those who died had waiting graves. Hierapolis, meaning "Holy City" was destroyed by earthquakes on more than one occasion. It became a Bishopric see before becoming subject to the Turkish Selcuks; a final earthquake razed the city to the ground after which it was never rebuilt. One unusual detail is that the famous philosopher Antipater, who later became the Emperor Caracalla's tutor, was born here