Miletos is fifteen kilometers away from Priene. It is on a hillside surrounded by large ports at the mouth of the river Maeander at the head of the gulf of Latmus. Now the sea is far off, silted up by the river. It had trade links with countries on the Mediterranean, the Black Sea and the Sea of Marmara. Miletus was of the most powerful and important Greek metropolises in Asia Minor and was part of the influential Ionian Confederation. The city encouraged erudition and founded several schools attracting scientists, architects, philosophers and geographers. Western philosophy originated in Miletus and it is the native city of famous men such as Anaximenes, Hippodamus, Cadmus and Isidorus. The first coins were minted in this city, exact weight measures were established and the Phoenician alphabet perfected. From the results of excavations, it appears that Miletus was actually the Hittite settlement Millawanda and it was certainly a Mycenaean colony by the fourteenth century B.C. . Miletus then fell into Persian hands and razed to the ground. It was rebuilt in 479 B.C. by Hippodamus, the famous architect and due course passed to the Romans. It began to prosper once more, new streets and monuments were constructed and it was renamed Castrum Palatia. The Apostle Paul preached Christianity here and the Emperor Justinian built city walls. The Venetians established commercial trading posts. In 1424, under Sultan Murat II, Miletus became a city of the Ottoman Empire but as the port silted up caused by detritus brought down by the river Maeander, the city's decline began. 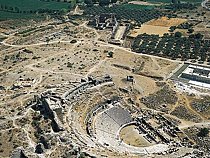 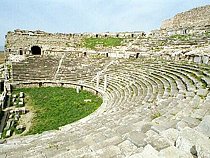 The Roman Theatre dating from the second century A.D. could hold twenty-five thousand spectators. The stage was decorated with exceptional sculptures and friezes and the facade was impressive, measuring one hundred and forty meters. Two columns on the top rows supported the imperial box. At the summit of the hill there are ruins of an ancient Byzantine fortress, the bouleuterion, the city's oldest surviving building, in the center of the two agoras. It was constructed along the lines of a semi-circular theatre and was dedicated to King Antiochus IV. The southern agora, the largest of the two, dates from the third century B.C. . There were porticoes on both sides housing numerous shops. It was, in fact, the market place but is now completely overgrown. Close by the agora is an exquisite mosque, the Ilyas Bey Mosque, built in 1400 A.D. by Ilyas Bey. The mosque has a square floor plan surmounted by a central dome but the minaret has collapsed. The decorations above the entrance door and the niche are highly elaborate. The Baths of Faustina, built around 150 A.D. and named after the wife of the Emperor Marcus Aurelius are in excellent condition. The walls of the Frigidarium and the Calidarium, fifteen meters high, are complete and there is a statue of a lion from whose mouth water spouted. Even the dressing rooms are still recognizable. The remains of the Gymnasium are worth seeing; used as the students classrooms. The Museum houses a collection of artifacts found during excavations.