The Greek Island of Samos not only makes for a beautiful back drop for Kusadasi’s spectacular sunset, but it also makes for a great day out. Ferry boats run from the Ege Port in Kusadasi to Samos daily during the Summer and the journey takes roughly 2 hours. 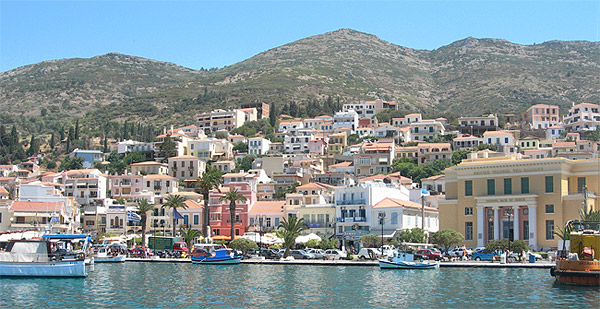 You sail into Samos’ main port ‘Vathi’ which is located on the North-East part of the island and built amphitheatrically around a bay filled with restaurants and waterfront cafes. Vathi has a population of about 9000 inhabitants and old Venetian and neoclassic buildings blend with the new ones, forming an attractive scenery.

Samos is one of the biggest islands of Greece, and the best way to explore is to hire a car, bicycle or a scooter and see the Island better. It is an island with green mountains, breath taking beaches and rich archaeological sites. There are abundant opportunities for walking, mountain biking and windsurfing. For those that would rather soak up some history there are lots of old fishing villages such as Pythagorion and Ireon, picturesque towns, ancient sites and museums around the Island. The most popular attractions are:

The Tunnel of Eupalinos, a major aqueduct, was built in the 6th century BC to bring water to ancient Pythagorian and runs for over a kilometre through the hills. You can walk for some distance in the tunnel as it is now fully illuminated, although it’s not recommended if you suffer with claustrophobia.

To the northwest of Pythagorion inside a big cave you can find a monastery devoted to the presentation of the Virgin Mary.

The museum houses a collection of items used in the daily life of ancient Samians, pottery, coins and small objects made of bronze along with female statues. The most impressive statue however is the majestic, five metre-tall kouros, discovered, like most items, at the Heraion sanctuary in 1980.

The Waterfalls of Potami

The area of Potami, located west of Karlovassi, is one of the most beautiful areas of Samos. A walk along the river through the forest leads to a small lake and the Potami waterfalls.

If you’re looking to chill out rather than sightsee then one of Samos’ beaches is the perfect place to do that. You can choose between long sandy and rocky beaches, either secluded by nature or bustling with activities, there is something to suit everyone’s taste.

You can’t spend Turkish Lira in Samos, and if you didn’t get a chance to change your money into euro’s in Turkey, there are a few banks with ATM’s around the town and along the waterfront where you can withdraw cash.

Unlike in Turkey, they have a siesta ( a short nap taken in the early afternoon) in Greece, which means all the shops close from around 3pm until 6pm. During this time the streets are deserted during the siesta time, but the cafes and restaurants fill up.